Things that you can now rent instead of buying: a power drill, a tent, an office for an hour, a Prada handbag, a wedding dress, a painting, a dog, your neighbor’s car, a drone.

This new way of consuming — call it the Netflix economy — is being built by web start-ups that either rent items themselves or serve as middlemen, connecting people who want something with people who own it. They are a growing corner of the broader sharing economy, in which people rent out rooms in their homes on Airbnb or drive people in their cars with Uber or Lyft.  Now, you are able to rent just about anything with Rntus. 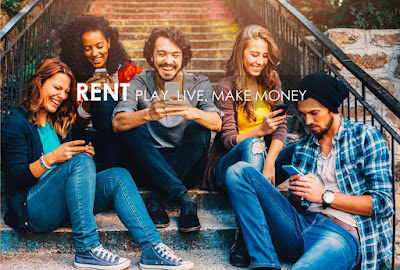 It is no coincidence that many of these companies — like Rent the Runway for designer dresses, Getaround for private cars and Rntus for tools, parties, equipment — were born during the financial crisis, when people needed new ways to save money, as well as new ways to make it. The ones that have survived and grown during the recovery could herald a cultural shift away from the overconsumption that has driven so much of American culture — not to mention American debt.

Then again, it might just be a new way to fuel conspicuous consumption, albeit in a more financially responsible and potentially less wasteful way. In other words, for some it is less about saving the planet than being seen in the latest, unaffordable Versace gown.

Either way, the entrepreneurs say the rental economy is part of a growing, post-recession movement to value over possessions. Anticipating a new belonging can bring more happiness than actually owning it, studies have shown, and everyone knows how quickly the glow of a new purchase wears off.
Even as the economy improves, there is evidence that people might have a chastened approach to discretionary spending.
So could the answer be to forgo ownership of everything else?
In many ways, renting is just a continuation of what people have always done — borrowing a cup of sugar or a pick-up truck from a neighbor. The difference is that technology has made borrowing possible at a broader scale, and between strangers.
Social networking profiles and rating systems offer a level of trust and verification, and mobile phones equipped with GPS take much of the work out of pairing people. Examples are TurningArt for renting artwork, Pley for renting Legos and LiquidSpace for renting an office by the hour.
Still, the services raise questions for consumers — mainly around trust. What happens if someone stains the dress being rented, crashes the car or loses the dog? (Rntus.com has ways to deal with the risks, including insurance policies, contracts and fees.)
If the idea persists, these companies could put a dent in retail sales and manufacturing of new products. Some already are. As more people forgo buying songs and stream them using services like Spotify, for instance, music downloads worldwide fell for the first time in 2013.
As for how much this trend will change consumer culture, consider this: People who rent items often end up buying them. Maybe in this economy, people just need a little hand-holding before making big splurges.
Posted by Elias Chavando at 8:49 AM